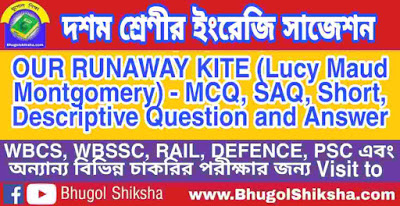 1. The children on the island had no one to
a. joke with them b. play with them c. run with them d. quarrel with them
Ans. b. play with them
2. To play with them on the island, the children had
a. everybody b. somebody c. nobody d. none of these
Ans. c. nobody
3. The number of children now living on the island are
a. five b. four c. three d. two
Ans. b. four
4. The thing that helped the family reunite was
a. a kite b. a tinsel star c. a lighthouse d. an old letter
Ans. a. a kite
5. The season when the children went back to the island was
a. winter b. summer c. autumn d. spring
Ans. d. spring
6. Philippa and Claude were
a. ten and eleven years old b. eleven and twelve years old c. twelve and thirteen years old d. thirteen and fourteen years old
Ans. b. eleven and twelve
7. People pitied the children because they were
a. fearsome b. weak c. lonesome d. hungry
Ans. c. lonesome
8. In winter, Philippa and Claude used to
a. study with others b. have fun with others c. quarrel with others d. fly kites with others
Ans. c. quarrel with others
9. The children were puzzled because they didn’t
a. have relations b. go to the mainland c. have their mother d. have any kites
Ans. b. go to the mainland
10. When he was asked about their other relations, Philippa’s father
a. looked indifferent b. became angry c. said nothing d. seemed sorrowful
Ans. d. seemed sorrowful
11. Summer on the Big Half Moon island is
a. sometimes lovely b. never lovely c. always lovely d. rarely lovely
Ans. c. always lovely
12. In summer, the harbour was mostly
a. green and quiet b. blue and calm c. turquoise and placid d. white and stromy
Ans. b. blue and calm
13. The hobby that attracted the children the most was
a. running pirate caves b. going to woods c. flying kites d. cutting out tinsel stars
Ans. c. flying kites
14. Claude was taught to make kites by
a. a boy b. Aunt Esther c. Dick d. his father
Ans. a. a boy
15. The game that the children played with kites was
a. shipwrecked mariners b. pirate caves c. half moon island d. need for speed
Ans. a. shipwrecked mari-ners
16. On the kite, the children pasted
a. red tinsel stars b. gold tinsel stars c. an old letter d. their names
Ans. b. gold tinsel stars
17. The accident with Philippa was that she
a. had her elbow bruised b. fell off a tree c. got stuck in a cave d. fell over the rocks
Ans. d. fell over the rocks
18. The children were desperate to fly kites before
a. the nightfall b. they went to the mainland c. going to school d. the wind fell
Ans. d. the wind fell
19. The first thing that came handy for patching up the kite was
a. a tinsel star b. an old letter c. a red paper d. another kite
Ans. b. an old letter
20. Claude looked foolish because
a. there was a hole in the kite b. the wind had fallen c. the cord had snapped d. the kite could not be flown
Ans. c. the cord had snapped
21. A month later, a letter came for
a. father b. aunt c. Claude d. Philippa
Ans. a. father years old
22. The letter that came for father made him
a. joyful b. cry c. angry d. worried
Ans. b. cry
23. Philippa’s father had
a. one brother and one sister b. two brothers and one sister c. one brother d. one sister
Ans. a. one brother and one sister
24. Philippa’s father quarrelled with
a. a. his sister b. Philippa c. his brother d. Dick and Mimi
Ans. c. his brother
25. When Philippa’s father came back, his brother
a. had fallen ill b. had gone missing c. refused to talk to him d. had died
Ans. d. had died
26. Aunt Esther was
a. divorced b. a widow c. married d. a spinster
Ans. b. a widow
27. Dick and Mimi found the kite on the top of
a. a tree b. a lighthouse c. a cave d. their house
Ans. a. a tree
28. Claude and Philippa were the names of Aunt Esther’s
a. grand parents b. uncle and aunt c. parents d. cousins
Ans. c. parents
29. The moment Aunt Esther read the letter, she
a. became worried b. became senseless c. became crazy d. became pale
Ans. d. became pale
30. Dick and Mimi were too jolly for
a. sentences b. words c. phrases d. alphabet
Ans. b. words

1. Why was there a sense of unhappiness in Philippa and Claude?
2. Why did Philippa’s father react in a strange way when he was asked about their relations?
3. Why were kites important to Philippa and Claude?
4. How did Philippa and Claude manage to fly the kite and what happened to it?
5. When did the author, his father and his brother go to the mainland?
6. Why did the people of the mainland pity them?
7. How did the authoress and her brother decorate the big kite?
8. How did the runaway kite reunited a family?
9. What was the real reason of Father’s sadness?
10. What is the theme of the story ‘Our Runaway Kite”?
State whether the following statements are True or False. Write ‘T’ for True and ‘F’ for False.Write words/ phrases/sentences from the text to support answer.(2 Marks)
1. The narrator wants to tell us about a kite.
2. Claude and Philippa have a huge age gap
3. In winter, the harbour is moderately cold.
4. Philippa and Claude longed for the company of other children.
5. The children on the island enjoyed a good relationship with the children on the mainland.
6. To the narrator, it was a great idea to have relations.
7. Philippa and Claude pursued only one hobby.
8. Philippa and Claude were not enthusiastic about kites.
9. Philippa and Claude wrote their first names on the kite.
10. The surname/family name of Claude & Philippa was Leete.
11. The children repaired the kite very quickly.
12. The children had to repair only one side of the kite.
13. When the cord snapped, the wind was blowing towards the island.
14. Father’s eyes looked moistened after he had read the letter.
15. Aunt Esther’s letter took more than three weeks to reach Philippa’s father.
16. Philippa’s uncle and father were equally responsible for the quarrel.
17. Aunt Esther had her husband living with him.
18. Dick and Mimi could perhaps climb trees.
19. Aunt Esther was shocked to see the letter.
20. Aunt Esther could only guess who the owner of the kite might be.

Get the WBBSE Class 10th English Suggestion by BhugolShiksha.com

will organize Madhyamik (Madhyamik)  Examination on the last week of February and continue up to the middle of March. Like every year Team BhugolShiksha.com published Madhyamik  All subjects suggestion.

The Following document gives the topic wise complete syllabus for West Bengal Madhyamik exams for both Class 9 and 10. Candidates can refer to this PDF for any doubts regarding the syllabus.
Madhyamik WBBSE Class 10th English complete syllabus Click Here to Download