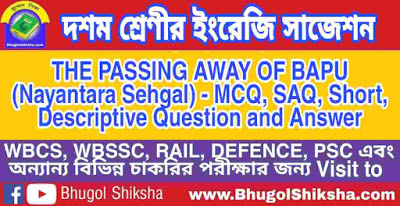 WBBSE Class 10th English : THE PASSING AWAY OF BAPU (Nayantara Sehgal) – Complete the following sentences with information from the text.(1 Mark)

1. Describe the atmosphere in and around the Birla House immediately after Gandhiji’s death.
2. Why had it to be announced that everyone would be allowed to see Gandhiji?
3. What question was uppermost in the mind of the people and why so?
4. Why was it decided that everyone in Gandhiji’s funeral procession should walk?
5. Describe the funeral procession of Bapu in brief?
6. What significance does walking have in our life?
7. Describe the immersion of Gandhiji’s ashes in the Ganges.
8. How was the writer affected by Gandhiji’s death?
9. How did the writer gather herself after she had broken down?
10. Why did the author feel sad?
State whether the following statements are True or False. Write T’ for True and ‘F’ for False. Write words/ phrases/sentences from the text to support answer.(2 Marks)
1. When the news of Gandhiji’s death came, the writer was eating lunch.
2. The news of Gandhiji’s death spread very quickly.
3. People could not speak because they were crying.
4. People had a look of helplessness on their faces.
5. People had joined Gandhiji’s funeral procession immediately before it started.
6. Padmasi spoke for a section of people present there.
7. It was a rather painful walk.
8. Walking is very expensive.
9. The railway compartment was decorated with flowers.
10. People kept coming wherever the train stopped
11. When the writer came back to Delhi, the she felt very helpless.
12. Before Gandhiji, people were indifferent to one another.

The Passing Away Of Bapu Prose Question and Answer

Get the WBBSE Class 10th English Suggestion by BhugolShiksha.com

will organize Madhyamik (Madhyamik)  Examination on the last week of February and continue up to the middle of March. Like every year Team BhugolShiksha.com published Madhyamik  All subjects suggestion.

The Following document gives the topic wise complete syllabus for West Bengal Madhyamik exams for both Class 9 and 10. Candidates can refer to this PDF for any doubts regarding the syllabus.
Madhyamik WBBSE Class 10th English complete syllabus Click Here to Download